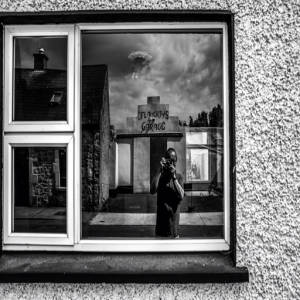 A wedding quite unlike most I've been to back home. My niece Jess marrying David Cuevas Diaz, originally from the Dominican Republic, in a sweltering church during a thunderstorm. They first met over the Internet, because Jess didn't know you could put a distance setting on the dating app and ended up talking to someone living in New York instead of Ireland.
They've persevered with a long distance relationship for seven years and aren't sorted yet, but today's ceremony cements them further. There was some powerful Spanish singing for a lot of the ceremony, much joy. Later a meal in Enzo's Italian place, where you keep thinking the food must stop soon, but it keeps on coming. Then speeches, a dance and cabs in the rain. I wish them well.
Jessica's Wedding