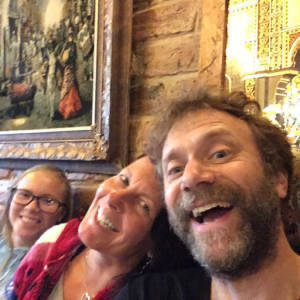 We wake, ablute, eat. The last of the eggs, poached, on toast, with beans. Coffee. The unfinished beers in the fridge. Then a seat in the heat of Regent’s Park to deal with the unruly presence of an opened, but unfinished, bottle of red.

Roxanne and Al are already at the Somers Town festival. There’s a street market and two live stages. At the main stage Pete Perrett and his band are about to come on. He’s the erstwhile front man of the Only Ones, emaciated and pale, supported by an energetic, beautiful band of youthful musicians.

There tunes are good, but the grey hairs want to hear some of the old ones. The young people leave the stage, replaced by the other two surviving Only Ones. From Here To Eternity. Another Girl Another Planet. Crowd pleasers. And then they’re gone and the young ‘uns wrap up.

And then to Stoke Newington via Portland Place. A great night of hilarity, that goes on into the early hours.