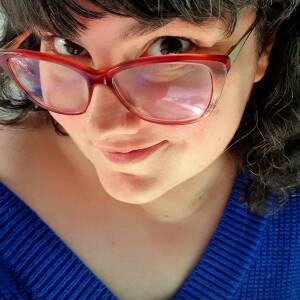 (Excuse this terrible photo; more on that later!)

Rich and I were off work today to head to Nottingham for a Jenny Lewis gig. As it's his birthday next week, we decided to take this as a birthday celebration and so I treated him to a mini pub crawl and a not-so-mini burger dinner. We sampled a few delightful beverages, my favourite being a dark berry and marshmallow sour called Die Tragedy (from Box Social Brewery), and I really enjoyed my chicken and pepperoni burger. All in all it was a pretty splendid day!

The gig was a whole different story though; Lewis herself was absolutely amazing, and I would argue that this was one of the best live performances I've been to if it weren't for the crowd and venue being a straight up nightmare. Rescue Rooms has a really odd layout; there are 2 raised bits on either side up 2 steps about halfway down the room, so if you happen to be at the back of the crowd behind one of these bits, you can't see a thing. At this gig, the merch stand was set up on the raised bit on my left, taking up room people could've been actually standing in, meaning it was impossible to get anywhere near to a good view. The crowd was chock full of idiots; some were loudly talking and laughing the whole time, barely anyone was singing or dancing (or indeed acting like they've ever been to a gig at all), a guy gave me a proper dirty look for daring to sing along, and two blokes loudly had a fight throughout the entirety of my favourite song. Honestly, if Lewis hadn't been so amazing I probably would've walked out about 2 songs in... It was the worst best gig I've been to. The fact that I couldn't see Lewis at all the entire time meant that I had to stick my phone in the air and hope for the best when trying to get a Blip-able shot; this fuzzy image is the closest I got..! Still, at least I managed to get the Jenny Lewis tarot cards and pin, and spent a most excellent day with The Hubby.