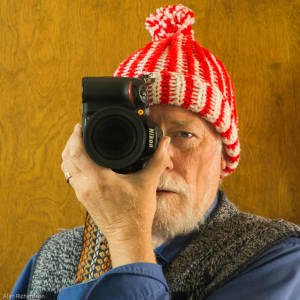 in Pat and Victor's garden.

We had a visiting priest at this morning's Mass and Pat and Victor invited him and a few others for a barbecue lunch. I arrived at Pat and Victor's and noticed a photograph and commented on it. We had lunch, chatted and played a little music. Then Victor brought out some camera lenses for medium or large format view cameras . . . and a few cameras which had belonged to his father; and whilst I admired those and fiddled with them he rummaged about and brought out more cameras including old box cameras, a Graflex Speed, several range finders and a couple of twin lens reflex cameras (extra); and whilst I played with those 8mm cine cameras and a video camera appeared; more point and shoots and 35mm single lens reflex including a Pentax K1000 and a Nikon EM (loaded with ASA 400 Ilford film) . . . needless to say I left much later than I'd intended to come home to hungry dogs!