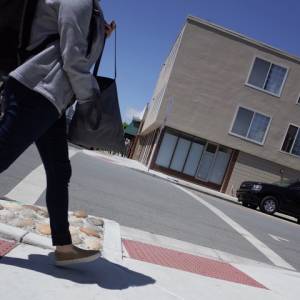 Not Far From Wherever

The wind-down.  This morning we met the landlord for a pre end of lease walk-through to make sure we hadn't trashed the joint.

It's been an interesting photography project this, the huge windows and views were a draw right from the start but making it a conscious 'thing' didn't come until a bit later.  I've witnessed some scenes I never wish to see again, and that's kind of how the daily corner picture started, as a way to normalize things again.  Today as I waited for the walk-through was another moment to think about what I've seen, it was such a mix just in the 45 minutes standing at the window.  A stylish man in his sunglasses, a grandmother and grand-daughter hand in hand, tech guys in their hooded sweatshirts headed to the office, nurses and doctors headed to the hospital...  But I chose this one, not a happy one, the guy in the white t-shirt having a melt-down and screaming at the poor guy that just happened to pass him who then deciding not to wait for the crosswalk signal sprinted across the road to the safety of the other side.  The white t-shirt man's bicycle just moments before had stopped working properly and in a rage he'd thrown the bicycle against the low wall of the building.  There was a continued unraveling, probably drug/booze/whatever fueled.  He did finally manage to somewhat pull himself together and gathered his bike and made his way down the street, screaming and swearing all the way.

Not sure what I'll be putting in this space after August 11th, but I've been thinking on it.  Anyway, a couple more weeks of this corner before the keys go back.