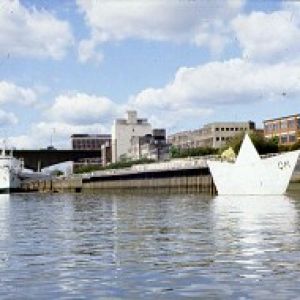 This is a quick photo of a page from the website on the iPad. If you've been with us on Blipfoto as we worked on the site for the last few months, thanks for listening!

It went live on Hogmanay, on what would have been George Wyllie's 91st Birthday, so in the end that was nice timing.

In the last couple of days, some teachers, even though they're on holiday, have been having a look at it and emailing. It's amazing they're doing that.

So, here's a couple of early reactions...

Your site has inspired a new project for 2013!! Would like to establish a geological column of Scotland's rocks in our courtyard.

That's really exciting because it's a school up north and they're going off in their own direction with it, a new direction, Higher Geology this time. The pages the teacher was looking at are about the Stones of Scotland.

And one of the primary school depute's emailed...

Just had a look at the website....it's fabulous. This learning context will hopefully be embedded in the primary school curriculum in the school on a yearly basis now and I know that P5 pupils are already looking forward to the "paper boat project" in P6...We now have lots of ideas and tips on the website....so no excuse!!


It's so good to see the different stages and subjects taking different bits of the website and seeing how they're going to use it. Definitely what it's all about!

So, an exciting start to the New Year. Who knows where it's going!