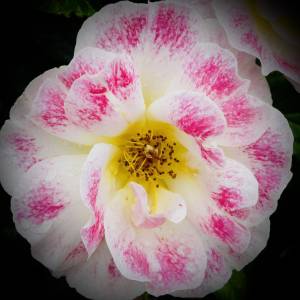 Looking at pictures of Nicola Sturgeon ( Scotland's First Minister ) on social media today I noticed she is wearing a brooch that I have as a necklace - in silver rather than gold. The Ogham writing - found in Orkney - has been interpreted as meaning ' a blessing on the soul' .  The penny dropped that it should have assay marks on it and I didn't remember noting them. After much squinting and using a magnifying glass as well as my specs I did see 'something' on the back. The only thing left to me was to photograph it and them enlarge it. This is not enlarged further in edit, so you can see how tiny the mark is. I can distinguish the assay mark for Edinburgh though. The 'extra' is the front of the design next to a UK five pence piece for scale.


Thanks for comments and stars from you all. Much appreciated. Haven't been on the site so much to reply individually this week. Could be the numbers of spiders on here. They do rather freak me out #arachnaphobia :-(