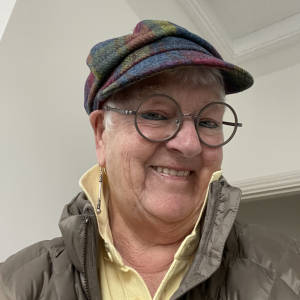 Once someone mentions something you see it everywhere. And so it is with water towers. They’re all over the island. Presumably most vineries had one. Not something I’d ever considered before. Now do they date from the tomato growing era or right back to the grape growing era?  Another thing I'd never thought about before was that the name vinery dates back to the grape era; I just assumed that everybody called a group of greenhouses vineries!
This morning I got the bus to the airport so I could quickly grab another geocache and get back home and put my feet up.  The first part went OK; smiley face on the map and back to the airport before the rain appeared. Bus drew up just as I got there so I got on even though it was heading to L’Eree (the opposite direction) because it’s a good ride and would eventually get to town.
As we went past I confirmed the location of another cache which I’l look for soon and then we stopped. The signs had shown that Route des Laurens was closed from 8am until 3pm today and sure enough there were trucks and a crane blocking it. I thought I was going to have to put out a plea for a packed lunch to be brought because the bus couldn’t turn around and the lanes were too narrow to use. But after about 20 minutes they shifted their equipment over a bit and we got through.