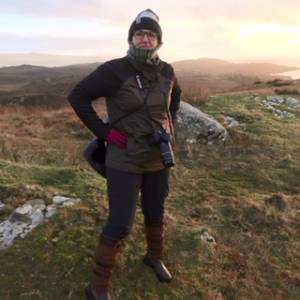 Before I took Breesha out this morning I had a major clean up to do.  It's amazing/astonishing/annoying how far the spray can reach from a Nutri bullet when the bottom hasn't been turned tightly enough.  So spinach, almond milk, blueberries, yogurt, chia seeds sprayed up the wall and over the hob and floor.  It was only on for a short time too.   Not what I needed before work.  Sometimes at work I meet some, let's say, slightly unusual people, some seem to enjoy chatting without realising how long they're sitting, but I'm well aware they might not have spoken to anyone else before me in the day so just accept it as part of the job.  But Breesha and I did get a nice walk once I got home and it was lovely to still have reasonable light at 5pm when this shot was taken.  At the bottom centre in the distance you can see Scotland's tallest listed building at Anniesland.  I might try and photograph it at night, closer, so you can see the way it's lit.
I think it's quite an interesting building so I've copied a bit of info from Wikipedia. Apparently it was designed to mimic the traditional Glasgow tenament standing on end - one has to use one's imagination for that though...  (I've just noticed I took a very similar shot this day last year)

Anniesland Court is a 22-storey residential tower block in the Anniesland area of Glasgow, Scotland, designed by J Holmes & Partners and completed in 1968. It is the tallest listed building in Scotland, and is remarkably similar to Ernő Goldfinger's later and more famous Trellick Tower in London. It is the only tower block in Glasgow to have been granted a category A listing.
Anniesland Court was designed by architecture firm John Holmes and Partner and was built in the first stage between 1966 and 1968, with additional work on the ground floor from 1984 to 1985.[1]
The building is unusual in that despite 22 storeys, the lift only has 7 stops. The design was meant to echo the structure of a traditional Glasgow Tenement lying on its side. Each of the 7 levels comprises 18 homes - 6 upstairs two-bedroom flats, 6 downstairs two-bedroom flats and 6 single one-room flats with level access off the main corridor.[2] They have full kitchens and bathrooms the same as the two-bed flats. The upstairs and downstairs flats have their two bedrooms facing the rear of the building. On the rear or north facing elevation are the ‘drying’ balconies. These are illuminated at night with blue lights and they can be seen by passengers on their way to land at Glasgow Airport.