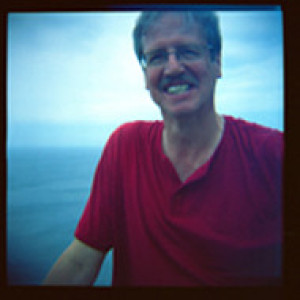 Heading down to The Tiq, I can do it on auto-pilot. There are still a few amber streetlights left so we sometimes have that old amber glow around but it’s getting less and less as the lamps are switched over to be more energy efficient. It’ll save the city a fortune in the long run but I’m happy it’s such a long-running project.
Back at the allotment today, the weather staying nice, but the second veggie bed was a lot slower going. The warm, wet winter has been paradise for the seeded grass and this and the third bed resemble lawns. Back breaking stuff to clear it all so another few sessions are needed before I can move on to the berries.
The robin was back feasting as I dug but he’s already been blipped so I tried to get decent pictures of the birds flitting on and off a nearby feeder. Inevitably though, these have followed an ageless tradition and can be added to my long line of fuzzy bird photos. I’ve put a greenfinch in as an Extra anyway, just ‘cos I enjoyed watching them and their pecking order!