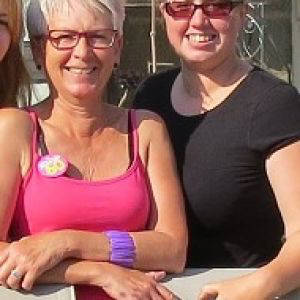 Black jac has seen a likeness of Ettienne  in the garden ornament  pa inted by me a couple of years ago.
This Saturday was going well loving the bright sunshine,
Then I went outside to get a screw put of something the box I had outside it always struggled so I have taken it away it was held down with screws. I had got 2 out but two remained so I got my electric screwdriver and opened the front door to go out ~~~~~~~~~~~~ when for some reason I don't understand why but I tripped up I went and down crunch  my glasses flew off , then my head followed the noise inside your head is horrific I now have a very large bump in the middle of my forehead and also landed on my left knee bruise will follow on later I am sure.
So feeling shaky I have left the task alone , makes me feel unsure of going outside at all, I still fear the pavements after my last fall and all the palaver that came with it.
How can a day change everything in your mind.
now hours later my forehead looks like I have had plastic surgery as my forehead is as smooth as you want if you want a shiny blue bump on your head that is  ..