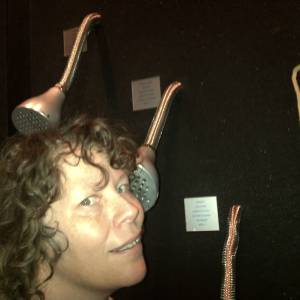 It poured all night, so EVERYTHING was wet i.e. the option to sit, at the tables in the gym courtyard, didn't exist.

I went round the corner, to the outdoor exercise area - which obviously was wet too, but the equipment is stashed under a verandah.  I re-arranged some steps, on top of a thick mat, grabbed a few yoga blocks and then sat down to read.  See the extra for the setup.

I chose an article about ancestral resting.

According to the research, the Hazda rest, about the same length of time, as modern humans i.e. they officially no less sedentary, than us.  But, they don't sit on the couch.  At least 2 hours of their resting, involves squatting.  Sometimes with a rock popped under their butt, most times, with NO SUPPORT.  And although the muscle activity, is not quite at the same level, as standing.

They're triggering the calf muscle, our second heart and this probably makes a difference to their health.

After just over an hour of active sitting, I headed for STEP and then zen pilates.

The significance of what I had just read, became personally relevant.

Definitely going to put this together for my blog.  Might also try to work   more "sitting" on the floor, into my home office work.

Rest of the day, was pretty uneventful.

PS.  Back blipping this, gym is CLOSED.  Missing it like crazy. Trying to do an hour or so, of computer work,squatting, each day to preserve muscle mass and fitness.  Eish !  It is HARD WORK.