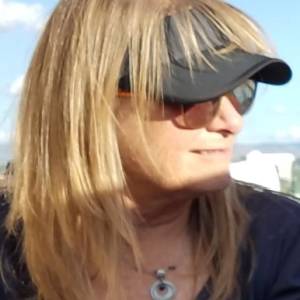 For my 100th blip I chose the spirit of the bear.
Surrounding the Albuquerque Convention Center you'll find a beautiful, colorful, mosaic motif replete with southwestern icons.

I chose The Bear in honor of my sister whose spirit animal/totem was the bear. All her life she collected statues, photos, refrigerator magnets of bears.  She died of cancer a little over 2 years ago after a warrior's bout with the beast.  Three-four weeks before she passed, she saw a black bear in her back yard on three separate days.  She lived in the back woods of Pennsylvania, so it is very possible to see black bears.

I do not know how to translate this connection.  I leave it up those more qualified than I....

Since bears could walk upright, they were thought to be special and know all things, and so they were symbols of wisdom and medicine.  Bears are also associated with the warrior spirit

Some Native Americans believed that it was possible to draw power from a bear by dreaming of one, by killing and eating part of one or by even touching a bear. These actions made a warrior invincible. Because of the Indians' beliefs that the bear had spiritual power, wearing a bear claw necklace meant protection and good health to the Indian wearing it. The Abenaki tribe believe that the stars of the Big Dipper are the Great Bear (Kchi-awasos).