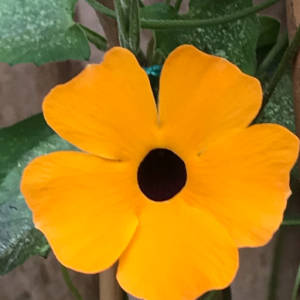 Well I did have some colours on as you can see the black and the red stayed, but I am happy with the overall effect.
Thank you AnneILM60 for the pens the bee body has some browns and orange but from this distance you can't see them.
I used what I had in the shed,I don't know why I had Yacht Varnish for I don't know, but by golly it worked.
Just for the record I got my first sting off of one of my bees, I normally can go into the shed unnoticed but not this time she had seen me go in there in the morning to find varnish and black paint and she chased me out and indoors.
still these are wild creatures  so as far as she was concerned I was not coming in..
Still I was surprised she stung me I had my dark sunglasses on and it was in the shade,I thought that she was inside the shed as I closed the door I felt the sting I thought what was that a looked at my hand and she was at the base of my thumb,so I quickly flicked her off I could see the sting and venom sack was still in me, so quick I used my nail to wipe out the stinger suck and spit.then went in to have a piriton and then I remembered my sting kit was IN THE SHED , but I went down and opened the shed door, phew the kit was on the shelf inside the door.
so put some Anthisan on the sting area.
It went bit red and there is a slight swelling where it went in.that was at 3.30pm today so it hasn't changed so hopefully i am not alergic. but they do say you have to be stung at least twice to know for sure..
so fingers crossed.
My daughter say's I scare her to death,well I have to realize at least a few of my hopes and dreams eh!  before I die.
I frightened my daughter once again by telling her I had to go back in the bee space to water the flowers in there.lol.  Ok I did put my full suit on to water the plants.
Last year I did not have any thoughts of having some bees and they came in October so everything I was doing in the bee space had to stop.
Water system. hose tied to the poles with holes in and a large funnel on the outside.(my side)
paint a Muriel on the back horrible wall.
I might buy some bark to put on the floor of bee space as it seems to hold water on the cement,so if a Bee lands it gets drowned.
but to do this and get the things I need,I would have to go out.
I suppose I could ask the daughter that worries about me to get them.
maybe. but not essential eh!
keep safe my blippers.
extra of an old draw that was in the shed, put a bit of polythene in the bottom fill with compost and a way we go.