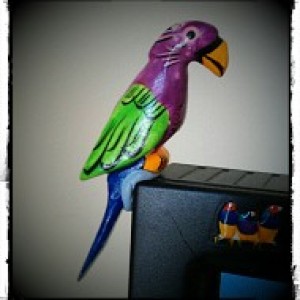 This is my 1,825th blip, or 5 year milestone, but actually I have been doing this for over 9 years.

I have timed this milestone to coincide with another anniversary. 9 years ago today my mum died, she was 67. I started blipping in the January of 2011 when she was ill with lung cancer, well actually was ill with the treatments for it, which made her sick and exhausted and didn't have any positive effect on the cancer. So while she was having the treatment, I was assisting her and spending a lot of time not doing very much. It was a lifestyle very much like this confinement now. Blipping was a big part of my life then, giving me some distraction and connection with other people.

A few days before this day 9 years ago, Mum was doing OK, so much so that both my brother and I felt we could leave her and go off and do some other things back in our normal lives. But then she picked up a bug, her temperature shot up and things happened very quickly, went from bad to very bad, and we had to call an ambulance in the middle of the night and sometime in the morning, I have no idea what time, it's all a blur, in a horrid room in A&E, I witnessed the life leave her body.

What I realise now, from all the coverage of the coronavirus, is that she was an example of a person "with a pre-existing condition" who dies because of a virus. She was going to die anyway, but it could have taken another few months. It could have been a gradual decline, with time to say her goodbyes, with some peace and dignity. I tell you this was not a peaceful death. It was a terrible experience for her and us, it would be for anyone, that feeling of suffocation while conscious, knowing it was coming and nothing could be done. How frightening. Traumatic. Each time I hear about the deaths of people from coronavirus mostly having pre-existing conditions, I think of this and what that means.

Something I have been shocked to read is how many people die of flu in a 'normal' year. I assume that the bulk of those are people also "with pre-existing conditions". I am shocked that we do not do more to prevent the spread of the diseases that have this effect. I have read up about this term "herd immunity" that has been bandied about. I have had the flu jab the last two years, and my husband has had it a lot of years as he has asthma. I have only ever thought of immunisation as a protection for self, not in the context of creating a herd immunity, to protect others. Why is it not used more widely, more strategically, to prevent flu spreading to vulnerable people?

At the moment we are focussing on Covid-19 as a killer. But these other viruses, that are relatively mild for fit healthy people, are killers for others. Each time a person battles in to work with a sneezy nose and/or a cough, dosed up with something that masks the symptoms, just to get through the day, getting to work on a crowded tube or bus or train, squashed in a lift, hands on a stair rail - that person is a link in a chain spreading disease that ends up somewhere with a death or deaths. And probably not a peaceful death. How much pressure does that put on the NHS, on Care Homes? Why is the pressure to keep on working rather than to self isolate and contain the disease?

I am thinking about 28,000+ deaths so far in this country alone, and we are all trying to ignore this enormity as just numbers, because it is too hard to cope with. There is a focus on getting "back to normal" and carrying on. But there has been a great tragedy, and this requires grieving and learning. I think we should be paying more attention to mortality figures and holding people accountable.