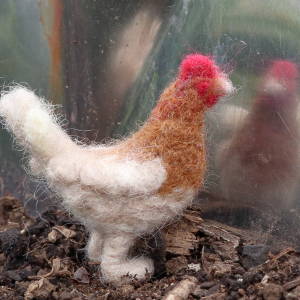 I finally got the courage up to make that youtube tutorial.  I borrowed a big-boy DSLR (nice lens!) and used my mirrorless for most of the shooting.  Then I edited it.  It's my third time editing a video and my first ever attempt to be serious while filming. I have way too much to learn and I'm not convinced I like video as much as still photography.  Actually, I'm fairly certain I do not.

My biggest problem I had was the mirrorless and the DSLR had different colourcast and exposure settings.  I'm guessing it is probably a white balance issue.  But the mirrorless shots were overexposed a bit while the DSLR came out perfect (but it is a better camera for video).  Editing was tricky and I didn't do well with the cuts between the angles/time/whatever.  I'm also not thrilled with my music choice but I spent an hour trying to change it and couldn't find the button.  So I'll be a bit more careful with that in the future.

I did figure out how to trim and splice different angles.  How to take stills (albeit blurry).  How to set the two cameras to be the same Number-P or whatever that's called.  That I do not have enough patience to wait for HD files to move around to the right place (from card to PC, from PC to editing, saving, resaving to the right format, and uploading to youtube) on my otherwise fast computer.  I also didn't notice enough improvement in picture quality enough to justify my boredom.

But for someone with no training and no idea what she's doing, I feel I didn't do too badly.  At least I hope I didn't.  But the comfort is, hardly anyone will ever see it so it doesn't matter.