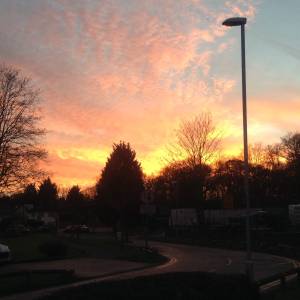 I forgot to take a blip today. Lucy and I popped out to pick up some oil for her car from Halfords. Luckily, Mr C and done a click and collect as there was a queue outside the shop but one of the assistants on queue duty ran in and got my order. We were going to pop into B&Q opposite but that looked too busy too. So we drove into Wandsworth to visit a Waitrose and picked up a few bits including some herbs to plant.

In the evening we had our family quiz as Sim was working last night. However, he messaged during the day to say he had an upset stomach overnight and didn’t feel great so would give it a miss. I did suggest that it can be a sign of the virus and he decided to ring 111 later in the day and said he should get tested just in case and as a key worker he would be a priority.

I hoovered around, including the stairs that have been rather neglected due to my ankle....well that’s my excuse. Potted up the herbs and repotted Lucy’s hydrangea.

Sim had his test this evening, saying it was really rather an unpleasant experience but all over quickly and now just to wait for the results.

I also forgot to mention in Fridays blip that Rebecca had a practise run at one of nurseries she works in about returning. She said the director was lovely and said we’ve missed you and would like to get you back in. So starting next week she is back to her normal hours and she’s absolutely delighted as being self employed she’s had no income since lockdown.

Extra is a wider shot of my love in the mist to show the display this year. The vetch is starting to come out and the alliums and salvias are hiding at the back. It was also full of bees which is exactly the whole point of my little wildflower patch. The main blip are some sort of Daisy blipped on my evening stroll.