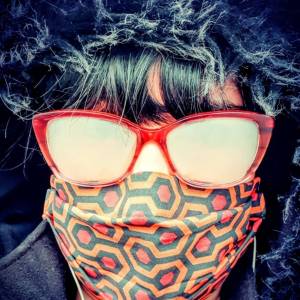 I had such a rubbish night's sleep last night; all because I was nervous about appearing on PodUK's live stream broadcast today. As with almost every other time my anxiety has kept me from sleeping, I needn't have worried, as it went very well! I had 20mins during the opening to chat about my work with BCHC Charity, as the event was being held to raise funds for us, and despite absolutely hating seeing my own face on the split screen, I think I did OK. I didn't swear or say anything that might get the charity or Trust in trouble so I'm seeing that as a win, haha! I checked into the rest of the show throughout the day and almost did a little cry when they announced at the end that they raised almost £1500. Brilliant.

Other than that, today was largely a day of chilling in front of the telly or with my head in my book, as we're awaiting a new vacuum so cleaning was off the table. It's been a lovely long weekend thus far, aside from last night's crappy sleep.