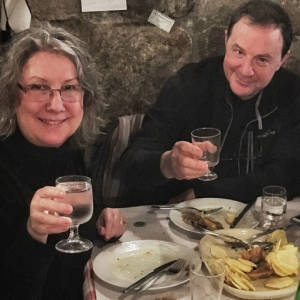 Within an hour of Braga, we drove to Amarante. On the Tâmega River is the Ponte São Gonçalo bridge. The original bridge, from the Roman era, was destroyed in1763, and this soon replaced it. Just in time to repel Napoleonic troops in the early 1800s. Gonçalos de Amarante was responsible for the early construction 'boom' in Amarante, late 1100s going forward. He is enshrined in the church, a befitting honour, due to his being given 'saint' status.

The extra shows what Napoleon plundered and what did not fare as well.
The 16th-century house, Solar Das Magalhães, is in the Renaissance style and belonged to the Magellan family: The same that gave us Ferdinand Magellan. The building was left as is, after that event, as a memorial. Other on-line photos show a lush green lawn at the base; but what you see now is real time work to reveal more of its original look.