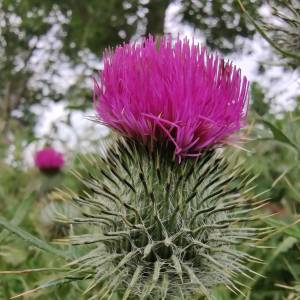 Today has gone by very quickly. I was up early to walk before giving Alan a lift to Swanson. He had not done that run in the Pentlands since before lockdown. I visited Tesco on the way home as there were a couple of Tesco products we needed. It's the first time I've been in a large supermarket. The organisation was good but there were several gaps on the shelves. I'll do Click and Collect next time and hope our breakfast cereal is in stock.

We had our lunch watching the Scottish Government's daily briefing. There was a lot to take in but the FM's remarks were clear and she carefully read the exact scientific information on two metre distancing. I'll read the transcript tomorrow.

Alice and Jonathan biked to see their grandparents tonight, then visited us. It wasn't warm in the garden but it was very bearable. We had been watching the film Eurovision on Netflix, partly because a schoolfriend of Alice was in it. The Icelandic scenery was interesting and it was a treat to see so much of Edinburgh, even some liberties were taken. It's unusual for us to see a film first.