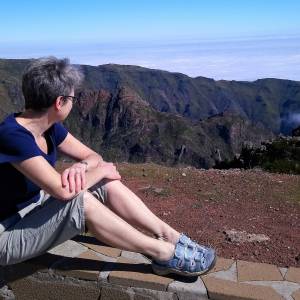 A grand day for it!

Such a lovely calm, sunny day that Mike took the dinghy out for a pootle around the bay.  He found the raft he uses for moving the mooring, so will be able to go and get it at a high tide and then he'll be able to lift the mooring.  Over the winter the raft had migrated to the other side of the bay!  These kind of things happen in the bad weather!

Mike had decided to do some maintenance and odd jobs on Peridot, the boat, over the summer rather than put her in the water.  A fine chance to  do them in the sunshine instead of having to be muffled up in thermals, trying to do things in the freezing winter weather.

H is off her drip, but is still very weak.  Talking to her is tricky because she has problems hearing the phone, but we have a bit of a shouting match every day!  She keeps saying that everyone is being so kind but she is longing to be home again.  Hopefully it won't be too long.