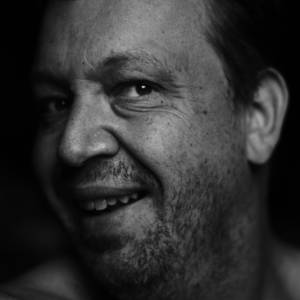 I took part, as official photographer, in a festival organised by Martin and Delphine.

In the vast garden, a picnic and bar (with crêpes - after all, this is Brittany), a life-size "Connect Four", games of skill, a medieval stand complete with mock battles, a giant mandala, games of palet (same rules as boules but with iron pucks thrown onto a square wood plank from a distance of five metres), a beam throwing competition (yes, you've read this right). And of course, artists galore: Jo, pictured here (pronounced "Yo", as she's Belgian), a klezmer music duo (a clarinet and an accordion), a percussion music workshop, an open stage for children during which Johanna (Delphine's daughter) gave a circassian performance on a suspended hammock, a close-up magic performance and workshop, and finally, stories told by Martin.