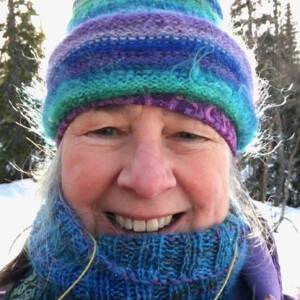 ...over anything in his way. Or bashes it aside. This was the afternoon romp through the forest, by the delta, throwing and chasing many sticks with a lot of high drama. followed by a lot of sleeping flagged out on the floor. I think today's blip captures the sensation of a speedy Rusty quite well. He had been in his pen for the best part of four hours whilst we went to the city and spoke to a dealer about small camper vans (he had none, but he can import one, and he had ideas which was handy), and to eat lunch out.

We also visited a garden centre and gasped at the price of plants we have dug up and thrown out at home, etc. Who knew those bushes were a saleable item? Who knew how much one tiny little plant of peppermint or oregano cost? I will cease the eternal chucking away of those herbs that are everywhere and start potting them up and giving them away on Facebook! I bought some snowdrop bulbs and some fritillaria, the plants I think of as Rennie Mackintosh flowers with checked petals, here they are! Last of the big spenders.

After walking his high-ness, I set some bread to rise and have just baked it into a bunch of bread rolls. It's the fantastic bread plus linseed. We are currently celebrating getting photos from builder Börje, of the window in situ and finished, plus the gift of a set of steps up to the helicopter pad - including with a hand rail for the ever-older population of friends. What a lovely thing it is to have a craftsman working!

Claire is at her work conference and staying over in a hotel in town with her colleagues. They have hardly met up since February and needed to be together I'm sure. Not one single person chose to go home this evening, despite most of them living in town. I think it shows just how much we need our human contacts, and to be honest I'm a bit concerned to see the lockdown fever rising all over the place, again. All this isolation isn't doing anyone's mental health any good at all, I suspect. Even the hermits are feeling the strain a bit, as there is currently no choice involved.

Keith is 69, I'm 65 and apparently we are to be careful. Swedish careful is a very different affair to the UK. We are restricting social contacts, keeping our distance and not hugging, washing and sanitising hands when out and about, staying home if unwell (haven't been) and generally being sensible - as well as getting out into what Swedes call "The Nature" every single day, for our mental health and happiness! I still haven't been called on to use my snazzy, home made masks, but they are waiting in the wings in case.

It's been a mild day on the delta, the waves have been a bit more insistent today, and rain is promised for tomorrow. We plan to visit the art gallery and spend more time with the fabulous quilts that are on display there. We were shooed out last time as they were doing a pre-booked viewing and we exceeded the number limit of 50. I enjoyed the big city for an hour or two and splashed out on a roll of golden glittery-gleamy wrapping paper - it will be a feature of the bookbinding for certain! £2.50 for 5 metres seemed like a snip! Otherwise we were very restrained and enjoyed walking past things we didn't need.

Rusty lives with one other human most of the time so he is a bit jumpy when we "Suddenly speak to each other like that!" or "Move about unexpectedly" or "Laugh loudly!" or sneeze or HUG!! He is in hard training. There is a fair bit of woofing and puzzlement. Poor lad. He's a terrier, they are not super-bright but he usually gets there in the end. It's a dog's life.