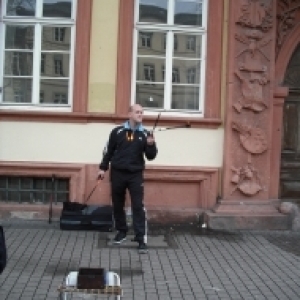 Today, we had the final Cross Country meeting on a Tuesday for the session - this is the meeting where awards and certificates are handed out. I won this cup, which is given to a pupil in either S3 or S4 who has shown dedication and committment, throughout the season - I honestly thought I wasn't going to get it.

In S2 though, I did win another cup called the John Dickson cup - this award was based on similar criteria to the Robertson cup, but is given to a pupil who is in either S1 or S2. Congratulations go to Sandy Thin who won the cup this year.

Congratulations are also due to Roger and George Poolman who gained full colours. In order to achieve full colours you have to do a lap of Holyrood Park in under 19 minutes. It's tough!

I should also stress that this cup has given me a ticket to prizegiving at the end of June...