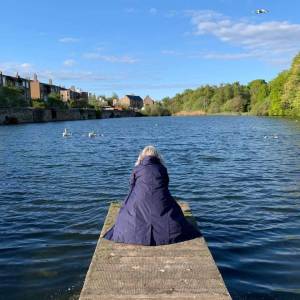 The forecast was for rain and I'd resigned myself to another day indoors. However it brighten up late morning and so we headed over to the Garry Bridge carpark and walked along the Garry to the Linn of Tummel.

We walked up to and beyond the Coronation Bridge , which took us into new territory and came back through a higher path in the wood overlooking the rivers.

We also saw two more red squirrels -  I've never had such a good streak at spotting them. The first had landed on some bark which came a way from the tree. However the squirrel made a good recovery (we had visions of it falling into the river) and was soon scrambling back up. It then stopped for a moment before leaping a not inconsiderable distance in relation to its lengths to another tree and other before disappearing out of sight. Fun to watch. The second was scrambling up a tall pine tree.

T is making a curry for tea and a wonderful aroma is wafting up as I type.