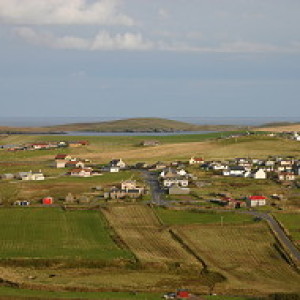 Apparently there were whales about this morning but I didn't see any. A lovely day of weather prior to a few days of rain heading our way.  Mousa Broch can be seen over on the Island and the remains of the Burland Broch can be made out on the right of the mainland. I've always assumed that if Mousa had not been an island the broch would not have survived as well as it has. The old ruined croft houses were apparently built using the stone from the Burland broch.