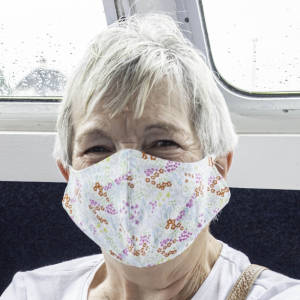 What a day weather wise here in north Devon. Morning started with my Wednesday Interval class. Then off to do some shopping and fuel the car up, and go and look for animals.  That was a mistake. As I headed where I thought the sheep would be, the heavens opened. It is very long time since I have been on the road, not following anything and having to have the wipers going on full! It was a deluge!!!

I saw the sheep but not where I could get a decent shot, and while the rain had eased, and the sun appeared, I headed home for lunch.

This afternoon, I visited a friend, and took her some RPS Magazines. In exchange I sat in front of the fire with a cup of tea, and a large slice of Lancashire Parkin, which was delicious. We then donned coats and went across to the field to see if the sheep were there. So this is my effort for today, the extra just shows what a pretty spot she lives and there are sheep and cows in that image ;-)

Tonight at 6pm I am joining an RPS Zoom Talk, with Margaret Salisbury, called The Dragon in monochrome. So looks like a late supper.