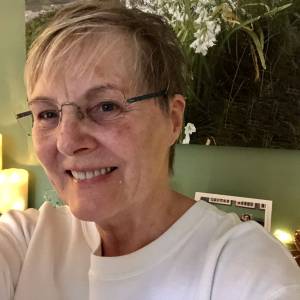 Morning view of the garden. 8.25am

I’ve just taken Stephen his breakfast tray. He’s in the back bedroom at present. 9 days after his operation already!
He’s doing well and beginning to do short walks. He went to the postbox at the end of our road the other day. It’s c100yds.
It is another lovely morning. As I looked out at our busy bird feeders with the nuthatches coming and going, bluetits and coaltits, as well as great-tits, I spotted what I thought at first was a redwing up in the rowan tree. But it was larger with a different call and pinkish orange breast. It was a fieldfare.
We don’t often have them in the garden, but it must’ve decided to come and visit. It was a cold, frosty start at 6.00am.
I haven’t any “extras” so maybe I’ll post the photo I took of him tomorrow.
You can maybe spot how well the tree surgeon(s) did the hedges and the back Liquid Amber maple next to the summerhouse. It was just beginning to have beautiful red leaves.
But Will had told me he was solidly booked up till January when I called.
After a pause he said “I’ll fit it in tomorrow for you.” And I’m pleased it was done this week. I sent him a little note card to say Thankyou.
They are such a good outfit and tidy everything up wonderfully.
I now have an unblocked gutter and all the rest are cleared after the guy came yesterday afternoon.
Then two friends stopped by. Socially distanced visits with me standing at the front door and the others on the drive.
The first one, Lilian, from French conversation group, brought a tin of Scottish Shortbreads.
The second one came at teatime with some shopping that I needed.
Our big shop is now being delivered next Tuesday.
We have enough till then.
I’ve been making apple sponge pudding and halving it to put some in the freezer. The same with a chicken casserole I made yesterday.
The convalescent is still not able to eat larger portions, so it is little and often.
But he did enjoy some of the casserole and a small portion of the apple sponge.
All the laundry was hung on the line early yesterday morning, and more or less dried.
Looks much more hopeful across the Pond.........but we’ll all be so much more less on the alert when there is any kind of announcement!
Just hoping it will not descend into riots (usually as a result of stirring from the, hopefully, soon not to be president).