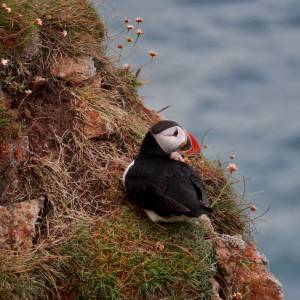 A Great Day Out

Today we headed north stopping off at Symposium at the Community Hub in Crimond for coffees and treats, they were affa fine!

Crimond is a small village north of Peterhead and has a few claims to ‘fame’.  Firstly the village church clock (see extras) which bears the inscription “The Hour’s Coming” was one of a very, very few in the world that had 61 minutes to the hour!  Originally, in error, it had six minutes between eleven and twelve.  After many years the clock was eventually replaced but the new one still has the old inscription which is at long last accurate (see extras)!

Next ‘Crimond’ is the most often played tune for the much sung Psalm 23, “The Lord’s My Shepherd”.  It was given that name by the daughter of a former minister of the village who composed it.

Lastly and still on a musical note the Norwegian composer, Edvard Grieg’s great-grandfather, Alexander Greig was born in and brought up on a croft on the outskirts of the village. Later in his life he travelled to Bergen and set up a trading company which exported fish and lobster to the UK.  When Alexander became a Norwegian citizen he changed the spelling of his surname to Grieg, the Norwegian variant of the name.

Alexander’s son John became the British Consul in Bergen.  He married Maren Hasland and their son Alexander is Edvard’s father.  The Peer Gynt Suite is Grieg’s most famous work.  Well done if you followed that!

From Crimond we drove across to Inverallochy which we usually bypass.  I wanted to see at close quarters the ship which lies wrecked about 100 yards from the shore.  We have seen it at a distance on our walks along the shoreline at Fraserburgh.

In my mind my journal title for today would be ‘Shipwreck’ but alas it was a bit of let-down (see extras).  The boat, the Sovereign, sailing out of Banff ran aground on the rocks in 2005 and wasn’t worth recovering so 15 years on it lies there providing cormorants with lots of places to stand and watch the world go by.

Whilst there were no human tragedies in that accident many fishermen from the village have lost their lives at sea and there is an attractive and poignant memorial which overlooks the sea which pays tribute to them (see extras).  The inscription written in Doric reads, ‘In memory o’ them that gid doon tae the sie in boats tae make their livin in the grite watters (Psalm 107)’. *

Finally we reached our destination and had a walk amongst the sand dunes which tower over Fraserburgh beach.  We walked there as it was high tide.  Then we had a wee wander round the ‘big’ harbour seeing  close-up the pelagic boats (deep sea super trawlers).  One company owns three and they must  have cost millions to build so no doubt the local community will be on tenterhooks awaiting the outcome of the Brexit discussions as fishing rights appear to be at the heart of the talks.

Lastly we couldn’t visit the Broch without buying some freshly caught fish from our favourite and the oldest smokehouse in town.

We really enjoyed ourselves today and had the added bonus of having blue skies overhead.  My favourite photo from today was the curlew which was standing the the water’s edge close to the monument in Inverallochy.

*In memory of them that went down to the sea in boats to make their living in the deep waters.