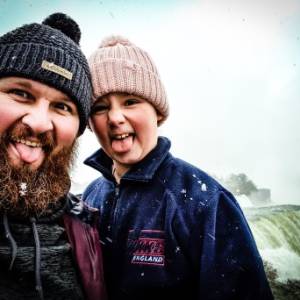 Finally got good enough weather to go ahead with a shoot that had been postponed twice, woke up to nice dry weather (though it had rained the night before) so I headed into the Northern Quarter of Manchester with 3 locations in mind & a bag full of camera gear.

Usually it takes at least an hour before I start doing the inevitable laying on the floor to get interesting angles, but today it took less then 2mins!

We used the first location, a fantastically coloured shop that perfectly matched the colour of the models outfit, it's a shop that lots of people shoot outside so the owners were really cool about us shooting there too.

Then we headed to the NQ car park to make use of the colours & structures it offers & that's when it happened, the model bumped into someone she knew.

Leigh Easthope is a successful creative make up artist who starred on the Sky programme Glow Up (now on Netflix), I of course didn't have a bloody clue who he was despite the fact I'd actually tried setting up a planned shoot with him in the past as part of a brand campaign I'd shot with an online fashion brand he's done a design collab with!

So there I was faced with a striking looking model with a cool red & black jacket that I needed to use somehow, I turned around & the they were, some gigantic red & black Biffa bins, the rest as they say is history!