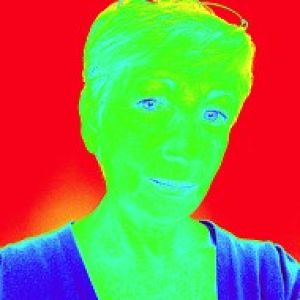 After a late start we drove over to Woody Bay car park and walked the mile or so down to the coast, another relentless descent, which would have to be reversed eventually.

It was a beautiful walk down through the trees with their gentle green, newly emerged foliage, and the birds singing their songs which echoed around the valley. There were plenty of waterfalls too, and so much water rushing down the hill full tilt.

Sandwiches were eaten close to the shale beach and conversations made with the few others who had decided to venture down to the sea.

The walk back took three quarters of an hour and it wasn’t too strenuous, although I was pleased to see the car.

Venturing further along the coast we came to Lee Abbey, parked up and walked down to the sea alongside more waterfalls on a fast flowing stream.

After that we drove to the valley of the rocks but didn’t stop, too many people.

Two gin and tonics at a local bar at a mouthwatering £11+, then back to base and the view over the coast and hills, where we watched hang gliders and paragliders enjoying the thermals.