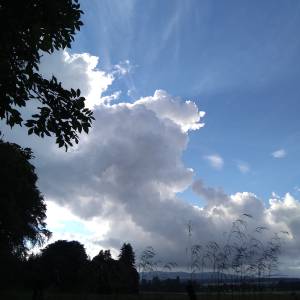 Walking to the school bus

I thought the clouds were interesting looking this morning at 8am, as my two youngest daughters walked down the road to the place where the school bus picks them up. (You can just see a couple of tiny figures on the road, as I was slow getting my camera out and they had almost disappeared). Also, the Cow Parsley and Rowan tree flowers are both in full bloom right now and looking nice I thought.

I realised after I took the photo that this will be the last 'normal' day of this school year. The students in S6 will be graduating next week and moving on and all the other senior students will start their new timetables and be moved up a year, once they go back after this confusing two week break they've just been given. Then just one week after they return it will be the Summer holidays!

They're calling the next two weeks a "mental well-being" break. (It's ostensibly to make up for the fact they weren't able to have the traditional exam 'study leave' this year, but I imagine it has a lot more to do with giving the teachers some extra free time in the timetable, so that they can catch up on themselves). Everything has been kind of chaotic and different this last term, because of the effect of the lockdown. Schools here are having to make things up as they go along.

I realised one more thing about this photo as I was about to blip it tonight...it will be the last time the two of them go to catch the bus together. I'll only have one daughter left at school!

EDIT: I had to upload this entry this morning - a day late - as Blip wasn't working last night when I was trying to post. I read it was because of site maintenance.