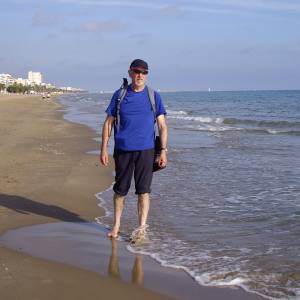 These things have to happen.  I awoke at 06.15 and went through to make myself a coffee.  Bibs wanted feeding.  I placed my coffee cup and the cafetière on the worktop, surely the quotidian action of millions.  I heated the milk in my large cup.  I put a big helping of cat food in the warm milk.  I ask you.  When I eventually next spoke to CMC she said she thought it was a bit early in the day for such industrial strength curse words.  When I explained she thought it was the hoot of the year.  I didn’t.

I went to the hospital at 7.45 with fresh claes for my Mum.  Back at base I continued repairing the stone dyke.  I spoke to Adam who is fencing (please resist FT).  CMC departed for Stromness. And returned – always a bonus.  I went in for a cuppa and happened to be standing next to the phone.  When it rang it was a man calling to set up a Direct Debit on all of our appliances which had previously expired on the same date.  He claimed the ‘freezer, washing machine, cooker etc’ had all just run out of manufacturer’s warranty – they hadn’t. He persisted.  Whilst I kept him talking CMC googled the organisation name.

I’ve always had Snapper on speed dial.  I called.  Her agent said she was on the other line trying to talk down someone called ‘Doris’ (think mop of white hair) from a window ledge.  What was she thinking of?  I cancelled my Standing Order with Snapper’s ‘Rant Support Service’.  Meantime the mannie on the phone continued his monologue, didn’t treat me like a demi-god, I was all agog and he offered me a catalogue.  It was then he made his mistake.  ‘So, Mr. Bell, we will be taking your first payment next week’.  The only remaining option was to swim to Thurso, nestling my pistol in a waterproof pouch.

What a thrill seeking day.  With me, was my suitcase; brushes, dusters, tins of polish.  I’m so glad I never travelled in ladies’ underwear.

Pat Jennings is 76.  He was frequently superlative.

Sleep well all of you.  Dream of better Blips.