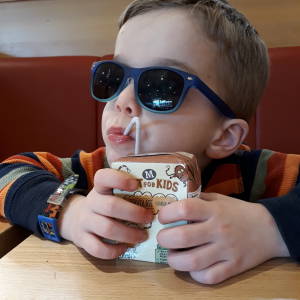 Slight excitement this afternoon as Cyclops got a puncture on his bike tyre on the way to school pickup.  CyclopsJnr had a brief surprise trip to after school club while Cyclops replaced his inner tube.  It was only a few minutes as it turned out...

At home CyclopsJnr had a go on the Pogo Stick he got for his birthday.  He managed to work up to about 5 consecutive bounces, so that's good progress.  As you can see he was pretty pleased with this.

Where was some fun experimentation to be done too (see extra).

Once he was too tired to continue, we went inside for a Lego City comic.  This one had a police motorbike with it which he had already (which he was a little cross about).  We enjoyed the story and the games though, one of which was a dice trail with various boosts and traps.  CyclopsJnr won twice.