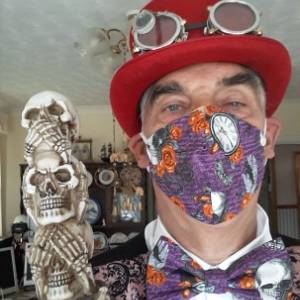 Needed to get to the level crossing in town today to take some train pictures for this , well it made be do 4K steps :-)
I was not sure which way Blipfoto would log this image, but the train won so I can post this today :-)
The story line is Free Guy gets put into a video game as soon as he puts these spec on , in this scene he puts them on and is nearly run down by a train !!! again  many thanks to Connah Ross Lilleyman for playing the part of Ryan Reynold's (Free Guy) from the film. Also a big thanks to Brian Penny for arranging the shoot .
Just had a thought, this might qualify for silly Saturday as this week it is get outdoors !! thanks to KangaZu ... AKA Peggy for hosting.
Our camera club had a virtual meet tonight, but as I was picking my daughter up from work will not be able to participate in them any more .