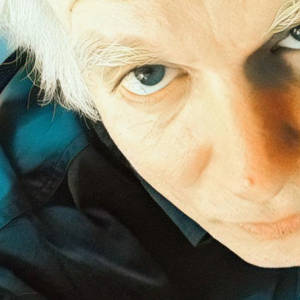 I used to walk by this building a lot on my walks to the post office. On the ground floor was a storefront that looked to be a vintage shop that was never open, but there were items in the windows with price tags on them. There were larger pieces of equipment that took up the rest of the rather small space... I seem to recall that it was dental equipment or something. There was a sign on the window directing visitors to ring the bell for service. Anyway, some time last year the windows were boarded up and not long after that this wooden barrier appeared. Soon after that, the art appeared.

It was my guess that whoever owned or leased the building also owned the Plymouth and Chrysler automobiles that were parked next to the building on Harlow Street (it's more of a driveway that a street, actually, as it's about three car lengths long). They're gone now and I believe the whole building is empty.