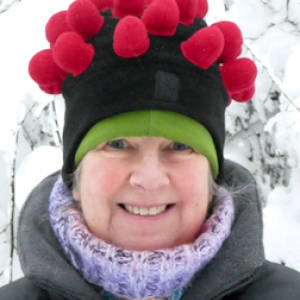 What a classic case of speaking too soon! We were up and down all night with the mops and the buckets! Actually kitchen towel & cleaning wipes that we bought for the van, very handy to simply drop them in the bin. Poor lad, he was not a happy creature, and a couple of hours later I heard him whining and he had been ill again. I cleaned up both times as brave Keith was taking him for a poo-walk round the garden in his dressing gown. Naturally one of us got back to sleep better than the other.

I read the whole of "The Unwinding", the book that a lovely blipper sent me around a year ago. Perfect calming illustrations and delicately magical words full of wonder. I always have it on my bedside table. Just in case...

So today has been a day of ringing the insurance company (no joy, I needed all Claire's details and her permission, hard to get when she is in flight between here and the UK). The very kind lady who was manning the telephones gave me her own "unprofessional" advice based on the dog she owns, that has a sensitive stomach. We are following the suggested regime with sugar and salty water to replace the lost electrolytes and boiled rice with lots of water. One tablespoon every hour. He is eating it all despite the distress of bleeding and squirting all morning, poor Rusty.

He has perked up a little after a snoozy afternoon, and I drove into town to get some medicine that should help. It's a big responsibility to be honest, I dreamed that he had died and I had to put him outside in the frozen air - I do a very nice line in catastrophic thinking at 4 in the morning. I imagined having to give poor Claire the news. Hilariously, we discovered his pedigree name is Smox Da Vinci. I will start using that once he is well enough to appreciate it!!

Keith has brought a mattress down to the front room and will sleep there tonight so he can react if Rusty requires letting out. If I did that I would probably not sleep at all, but as Keith said last night - I seem to have a talent for sleeping! I am filled with envy. I have never needed a lot of sleep, and had all sorts of sleeping problems when I was a teenager, and now again as a postmenopausal woman in her best years!

In other news, I have found yet another glorious set of grey shaded pens for pennies, in the equivalent of the Pound Shop in the UK, the Dollar Store. The drawing of the day was done with them. I was there to buy poo bags (such an enchanting theme I'm into at the moment) and thought I'd find some interesting Christmassy things for my cards. I bought 80 golden stick on stars for £1, I always have stars on my cards. It's a symbol that works for Christians and others too.

The blip is the lake and the farmer's bonfire that was smelly and due to the inversion was filling the higher ground with acrid smoke. My asthmatic coughing got even worse so we turned back down the hill to the clearer air. It was quite a profound effect, one that Keith didn't smell nor did he feel it catching in his throat. I am happy for his robust health! e came home and had breakfast, and I boiled some pudding rice for Smox Da Vinci himself. One tablespoon at a time. He took it well.

So this has been a strange Sunday, one that I hope we won't have to repeat tomorrow. The weather was marvellous again, sunny and bright, crisp and clear. There is snow everywhere, a thin layer in all honesty, but it really makes a huge difference to the light levels. One cool thing I did today was get one of the four strings of lights working again - wow! It isn't the usual way an electrician would do it but I channeled Mike in Portugal and it is fixed. Just don't look too closely! The other three are obviously faulty in invisible ways as they didn't respond to my tender mercies.