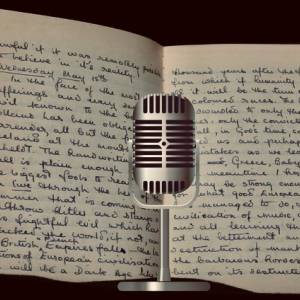 One of our first jobs for the P2P project has been to transform the war diary entries into a script for recording. It's interesting to consider the number of times that Lorna's original writing in ink has been transformed:

1. Typed up as a single Word file by her nephew Jonathan Lloyd
2. Copied and pasted (with some light editing) for individual blips at http:/:blipfoto.com/lornal between September 1st 2019 and January 4th 2021 by P2P project team member (and Lorna's great-nephew's wife) Hazel Hall
3. Recreated from downloaded blip entries as a new Word file by her great-nephew Tim Read. (We used the blipfoto entries rather than the original Word file typed by Jonathan so that we had the edited version.)
4. Transformed into script format by P2P project team member Bruce Ryan