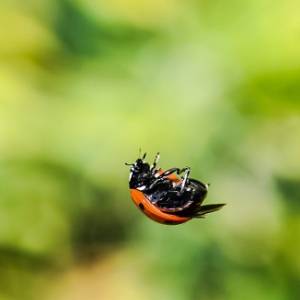 What does it mean when a ladybird lands on you? Many of us would merely smile at it, shriek, or brush it off, but the Celts took careful note of such occurrences.
Some believed that the ladybird brings you luck and if a ladybird landed on me, I am to make a wish. When the ladybird flies off, it would mean my wish would come true because she has carried it to God.

The Celtic symbolism, taking root from Ireland particularly, considers ladybird as a sign of protection. They believed that killing a ladybird was bringing bad luck upon oneself. Some of the tribes believe that if one were to kill a ladybird, he would encounter death the next day.
That's why this one is alive! Lol