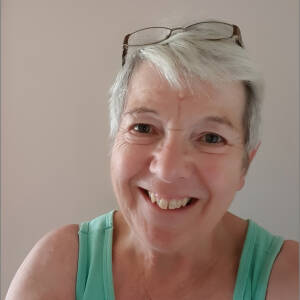 A wake up call at 05.15 this morning, with a very loud bang! Knew it was close, and after checking the road front of my bungalow, went through to the utility room. First I saw the car "parked" with a bit of a list on the front near side, on the wrong side of the road.. Then police and ambulance arrived, and all of a sudden the top of the telegraph pole ignited, a short there. It finished up that there were two ambulances, two police cars that I could see. A fire engine, and a cherry picker with engineers to check the pole. The flames soon died. Think the driver of the vehicle was walking wounded, don't know if any one else was in the car, but they did take him off in the ambulance.

After they cleared the scene, the road remained closed. It was so peaceful you could hear bird song! I did have a wander around to have a closer look at the scene, and discovered that the driver had wrecked a chunk of garden wall before hitting the pole and finishing where he did. It was nearly 7 hours before the road was reopened.

Another hot day, but the house does feel cooler, outside it has hit 32'C and this is in the shade :-)