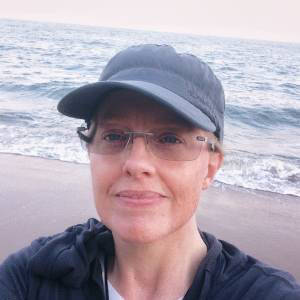 I had two half days in the itinerary for Reykjavik, the capitol. Now we had all of today and the first half of tomorrow. Kate suggested the Perlan museum and it was brilliant. We saw a video of the explosion last year - it would have been incredible to see in person, but some of the views were best on a big screen. Owning the drone yourself would not have been the same because you’d view it on a tiny screen while flying. It was so beautiful that we were astounded by it.

The museum had an ice cave!! You must see Kate’s picture of it, it is brilliant. The ice cave was actually made of ice. My main and one of my extras is of it. This is probably the easiest and safest ice cave for you to go in. At the top they had a restaurant with a fascinating glass dome. For this you really must see Kate’s artistic pictures.

Then we have another standard Iceland photo, the statue of Leifur Eiríksson in front of the Hallgrímskirkja church. Leif is the first European to go to North America. It was a gift from the US to Iceland (does the State Department decide these things?) to commemorate the 1000 year anniversary of Alþingi, the parliament of Iceland. Alþingi was first convened at Þingvellir in the year 930 AD. Yesterday we went to the national park where the area is preserved for posterity. The statue was designed by Alexander Stirling Calder who won a 1929 competition to do so. When Iceland participated in the 1939 New York World Fair it requested permission to make a copy to display in the Icelandic pavilion. An identical copy was made and it is now by the entrance to the Mariners' Museum in Newport Virginia.

IF we are lucky yet again, we will see the aurora borealis one more time tonight. If we do, I’ll update.

I will try to get some pictures of us on dragons tomorrow.

Update:
We saw the barest whisper of green - but we did get to see the Milky Way!!! And I haven’t seen the Milky Way in the US at all this year, so such a delight to be able to see it now. It went completely across the sky. I am glad I had the app PhotoPills so I could see where the densest part would be. Alas, I can’t load it.

Update update:
I managed to load it as an extra. :-)