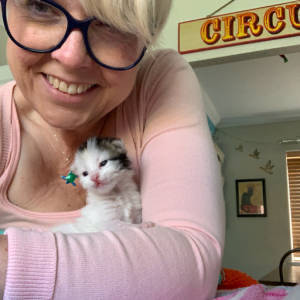 Bog eyed Zebra … all the way into town and all the way back . I take it off her when she plays off lead in the park as she does put her toys down when she runs free …. When we exit the park she taps me and I give her ‘baby’ back.
I guess when you are a rescued ex breeding dog from a filthy cruel hell hole you are allowed as many special toys as you want xxxx

I’ve cleaned the greenhouse out , found a frog , captured frog and googled best place to put frog , apparently they like being under sheds and decking , so I released him under our vast amount of decking and also managed to make a mini pond thing with a large plastic lid , I pushed that under the decking too and then put the edging back so the cats can’t get the frog …. The other side where the cats can’t get has loads of big gaps ( it’s very tricky to explain so just nod and pretend you know what the heck I’m rambling on about ) so Mr Frog will not be trapped … ANYWAY to surmise he’s as safe as he can be anywhere and he might have friends so instead of disinfecting the green house I just used water because I didn’t want the disinfectant running through the drainage in the flooring ( holes drilled … nothing special) and running under the decking and killing my frog(s) … again I beg you all to just nod as I’m bored with myself writing this !! Ha .
I also emptied some annuals out of the pots and shouted at Jim to go to the tip with some crap from the garage …. The end