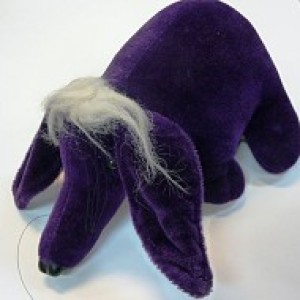 a little bit of rhubarb

Honestly, I am starting to be frightened at all the pro-Dr-Who people who have come out of the woodwork now that it's the 50th anniversary. Something that I once enjoyed in years gone nerdishly by has become seriously fashionable, and I don't know what to do about that. It's doing my head in.

So my local area opens a Dr Who pop-up (i.e. temporary, short lease) shop, and suddenly the streets are infested with people queuing the length of the street, all dressed up as daleks or the 4th Doctor, 10th Doctor or 11th Doctor (personally I liked the 4th Doctors, because they all wandered around offering you jellybabies).

Uni students have stayed up all night so they can paint a large cardboard box blue, fix a pair of suspenders to it and then wear it up the high street with a bike light on their head. There are free-ranging weeping angels randomly leaping on people. EVERYBODY in that queue along the length of the street has a sonic screwdriver (although the 10th Doctors bitterly object to the fact that you can only buy the 11th Doctor's screwdriver.*

I mean, bless ém for having the energy to stay up all night with a bucket of blue paint or putting the finishing touches on their fez, simply in order to spend a few hours queuing to buy a cyberman tea towel. It's not as if there is anything cool available, like a dalek tea cosy or anything. It's not as if David Tennant (or anyone connected with the show) is ever going to come over from the UK and open the shop.

I was honestly surprised at the number of people who showed up for the opening of the pop-up shop. (of course I was going to show up to have a look - people gadding about in costumes? I'm gonna be there - although I didn't hang around to have a look inside).

I'm just left wondering where did all this hype and obsession come from? By virtue of backblipping, I can report that that street-long queue stayed constant for the next THREE DAYS.

I mean, yes, sooner or later I'll go have a stickybeak (because people in other states have given me a list of things they want me to buy for them, and because there is an original 1970s dalek in the window that I want to have a look at).

But what happened to the notion of apathetic youth? They're all gung-ho - and it's, what, six months yet to go until the actual 50th anniversary?

I blame either:
a) the decline in religion; or
b) all the artificial chemicals in food.

Nobody can be this hyper for so many months. Surely?