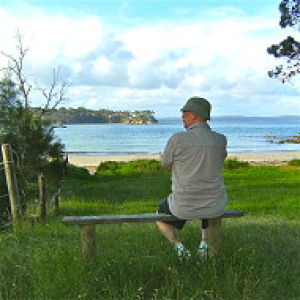 Darlinghurst, once a red-light slummy crime area of inner Sydney, has been radically renewed in the past 20 years to become upmarket and trendily cosmopolitan. We were there today because my father-in-law had an appointment at St Vincent's Hospital. This is where Dr Victor Chang, the heart-transplant pioneer, worked until he was killed in a botched extortion attempt in 1991.

There is a memorial to Victor Chang over the road from the hospital in Green Park, a small grassy patch which itself figures prominently in Darlo's history.

When Governor Richard Bourke of New South Wales built a new jail and courthouse in Darlinghurst in 1841, prisoners were marched here from the old jail in Circular Quay. With them came Alexander Green, who had arrived in the colony as a convict in 1824 and become assistant hangman in 1828. He was described as very ugly, with a pockmarked face and stumps for teeth, of simple mind, and with a large scar down the side of his face from an axe attack by a prisoner.

Green lived outside the jail, in a hut in the park, but was forced to move inside the jail walls when larrikins burnt his house down in 1842. Eventually he was declared insane and was dismissed in 1855, after hanging 490 people. He was admitted to Parramatta Asylum in 1856 and remained there until his death in 1879.

The Darlinghurst site was granted to the local council for use as a public recreation ground in 1875. Despite the coincidence of Alexander Green's association with the area, the park is actually named after Alderman James Green, who represented the district from 1869 to 1883.

In 1925, a bandstand was built in the park for public concerts, and it was converted into a cafe in the 1990s. How it looks today is my blip.