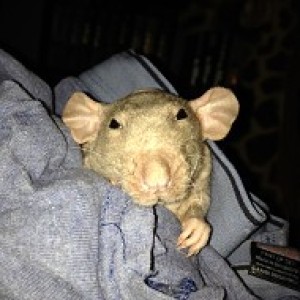 I was originally just going to take Pascal for his check up on his jaw, which is still not healed after he had an overgrown tooth root removed. However, Cassady also came, as he has an abscess under his eye. And I decided it was time to take Tiggy, who's been limping for a few days.

Pascal will go back in later to have his wound cleaned again. Cassady stayed in to have his abscess looked at. Tiggy also stayed in for the day - she was x-rayed and it was discovered that she has a torn knee ligament.

Needless to say, it was an expensive day. Tiggy, in particular, cost us. Cat treatments are so much more expensive than rat ones.

Be time to do the flea treatments soon for everyone - as Mr Blow-up Flea reminded me!