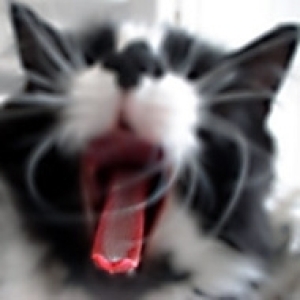 The glass is half empty?!

As part of my health drive, I occasionally make a smoothie with my Mum's cast-off juicer. She decided all the cleaning up involved just to puree three pieces of fruit wasn't worth the effort, and after yesterday afternoon's debacle I'm inclined to agree.

Having revved her up and inserted my banana (please, people), I wondered why there didn't seen to be much appearing in the glass below the juicer. This observation was quickly followed by the smell of burning liquified banana, as instead of collecting in the plastic dish designed for such fluids, quite a bit of the puree had trickled down through the now fruit-of-a-herb-encrusted motor.

Of course, being a modern contraption, the cheap chromed plastic casing was welded in place by four tiny, inaccessible screws with custom heads, presumably to encourage you to throw the thing out of the nearest window as soon as it failed. But I am me. So instead, I spent half an hour finding my set of tiny computer-fixing screwdrivers, managed to get one to fit the teensy screwheads and undid the case. Then I cleaned as much gunk out as I could without getting the motor too wet.

Whether there is a loud bang when I next choose "Death By Smoothie" remains to be seen (I think I would prefer Death By Snoo-Snoo). Any life-lengthening benefits of my drink (which in total comprised 2 bananas, 1 apple and some Greek yoghurt - delicious) was more than undone by the stress and anguish that had ensued.

Needless to say I will not be buying anything made by Kenwood ever again, and this one will be replaced by a proper smoothie-maker as soon as I can afford it. Any recommendations gratefully received.

By contrast, this Vintage Bakerlite Bush DAC90 A Valve Radio is at least 60 years old. I bought it at an auction in Fife twenty years ago because I liked the look of it, never expecting it to work. I think I paid £10 for it as part of a job lot (which also included an old Anglepoise lamp). You seem to be able to pick these radios up on Ebay for very little still.

To my amazement when I first turned it on - after a few seconds delay - the valves began to glow and the distinctive warm honeyed tones they produce transported me back in time. Even the little dial bulb lit up. I love all the now long-gone services. By coincidence or design, BBC Radio Scotland is still on the same frequency. It may be one of only two medium-wave stations I can receive (the other being Five Live), but that's two more than my modern radio can pick up in my lead-lined flat!

The blip I was going to post today will have to wait until tomorrow. At least my smoothie trauma led me to blip the radio - so maybe the glass is half full after all.


I wrote the above this morning, and got back late after taking pictures for one of my clients (a wedding venue) so too exhausted to blip fully - will catch up tomorrow.