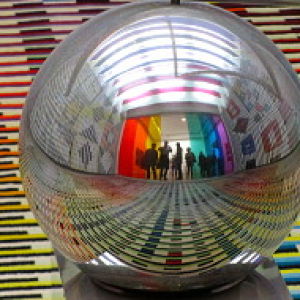 This is our Clipper Hoge Wier, with almost 800 square meters of sail heaved. Here she goes on the IJsselmeer near the lighthouse 't Paard of the peninsula Marken during the Beurtveer 2013.

That is a traditional race for classic flat bottom cargo ships. The ships start at Workum and they have to sail around the IJsselmeer in the old fashioned way. That means that the use of an engine is not allowed. They have to dock and undock under sail at 5 obligatory harbors (Workum, Lemmer, Blocq van Kuffeler, Durgerdam and Medemblik). And the ships may dock and undock at 4 more harbors for extra points ( Urk, Volendam, Hoorn and Enkhuizen).

The race started at monday. The ships can choice from 4 different kind of routes. Part 1 of the race is to Durgerdam, for a 10 hours obligatory stop. Our clipper did this first part in just 11 hours and 30 minutes. The fastest time, so first place after day 1! Day 2 she did in 10 hours and 49 minutes. Enough for a 5th place on day 2. It was in total just 37 minutes short for the 1st place overall. So she ended 2nd overall after more than 22 hours of sailing! Great achievement!!

Victory went to the tjalk "Overwinning" ( its name means Victory), a very well deserved winner. They did a great job too.

I'm also a member of the racing team, Team Hoge Wier. But I'm still injured, so I wasn't able to race. But I did get some nice pictures from ashore!