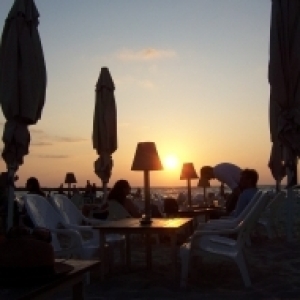 Until the last moment I didn't know if I would be running or not as I wasn't feeling well but in the end I decided to go. I still had to cook for sis so I did that in the early afternoon, after that a ton of people came to see the house. KP who was also running asked if we could meet, I agreed and we set up a place. Of course she was late... I waited for 15 minutes then realizing there were 5 'waves' of departures scheduled 15 minutes apart and that I was not due to run until 20:45 I decided to head back home to pick up something I forgot. I tried calling and texting but every time there is a bg event like that it is nearly impossible to reach anyone in the vicinity by cell so I had to run alone.

Everyone who already ran that race once told me not to expect a personal best as it is a very crowded course. For the first 6 km I didn't know what they were talking about - we were running on a main street and there was plenty of room. Then we hit the park... And it all slowed down because the paths were relatively narrow - on the bright side it was way less humid then it had been in the city.

Overall it was a good run and I had a great time - next stop, the Tel Aviv marathon at the end of February