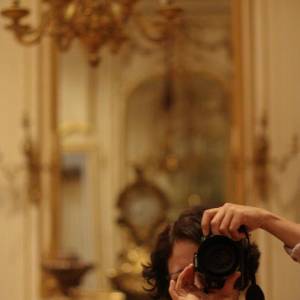 This is a photo of the sketch that Nelson Mandela made of his cell in Robben Island. The sketch appears in a catalog created for the exhibit of his lithographs called "My Robben Islands Series I and II." It was presented by Touch Galleries in La Jolla, CA in 2007.
Today when he died, I thought of how big and forgiving his heart was. He spent 27 years in this little space, and still thought of fighting for freedom.

The following text appears on the catalog next to the cell drawing:
"This sketch depicts the view into Nelson Mandela's prison cell through the open cell door. The few possessions that prisoners were allowed have been emphasized in colour, and they are symbolic of a link with reality outside of the harsh prison regime.These meagre possessions typically include letters and photos of family and friends -- pieces of paper that acquired tremendous emotional value to prisoners."