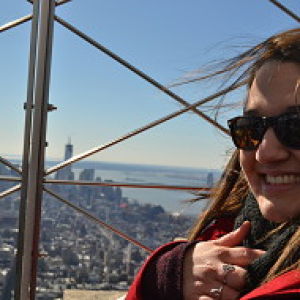 Second day of the Budapest trip and I spent the day trying to soak in as many areas as I could. First I headed to the Jewish quarter where I discovered some beautiful synagogues and some quaint streets with nice boutique-feel shops and an array of cafes and bars. I then made my way up to Heroes Square where I was greeted by an amazing sight as soon as I left the metro - a square of statues and monuments above you, with two classical buildings alike to Greek architecture on its left and right (the fine arts museum and the palace of art). I continued to the park behind the square where a beautiful castle stood nestled amongst the trees and ponds. In one of the buildings there was an exhibit at a museum inside the castle which I was interested to look inside - while the interior was quite impressive unfortunately the exhibit was basically a history of hunting and there was a huge display of animal skulls and skeletons hanging from every wall which wasn't quite in-keeping with the beautiful stained glass windows in the background! Leaving the museum I was greeted by a man playing an interesting stringed instrument (I later discovered to be a cymbalom) - after a few minutes of playing an eccentric man in a pink waistcoat approached him and began to sing along in an amazing operatic voice! Was quite the show! After enjoying the music sitting on the steps outside the museum and eating lunch I decided to take the metro to the parliament building.

The parliament building (pictured above) is a spectacular sight - intricate detail and tall spires. As I was walking towards the square I could hear shouting through a megaphone and arrived to discover a demonstration or rally - still not entirely sure what was going on apart from it having something to do with Hungary's membership in the EU. I followed the group as they marched towards the entrance preceding to shout at or clap for certain politicians that were leaving (all of them guarded to the doors of their cars by a large police force). I can only assume there had been some sort of debate/vote recently following the election result in April (http://www.theguardian.com/commentisfree/2014/apr/09/hungary-election-europe-prime-minister-viktor-orban) though I haven't been able to find anything specific from an internet search - the EU elections take place in a couple of weeks so that may have something to do with it . Has definitely been an interesting second day in Budapest!